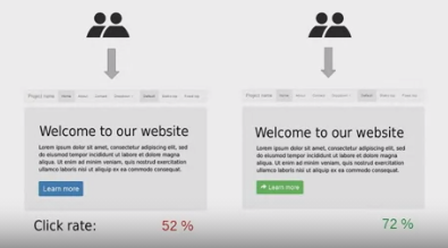 A/B Testing is a process of comparing two groups – test group and control group.
Two groups usually means two versions of some market asset. A market asset is something you want to research such as, if it's a webpage, a title, a layout of a design, a new marketing slogan or a phrase, a feature like the colour of a website button, a font, all these things are compared.
The only difference between the two groups is that the test group has the treatment, and the control group does not. Test treatment is the variation you want to test.
The test group has a change in only one element, such as a bold title vs normal title: A/B Testing vs A/B Testing.
Use case of A/B Testing: Digital Marketing
A/B Tetsing is used in digital marketing such as web page experiments. It allows us to test which feature achieves our goals better. For example, if we want to promote an ad and are designing a “Learn more” button, should we use a blue or a green button? Which one attracts more clicks?

In this step, we select one independent variable that we want to test. In the “blue or green button” example, the colour of “Learn more” button is the only variable.
We can test multiple variables, but only one at a time.

We need to identify the goal before running the test as it will define the metric to assess the test. The metric will also be the dependent variable in our test.
In the “blue or green button” example, the goal of changing the colour is to encourage the users to click. The metric here is the total number of clicks.