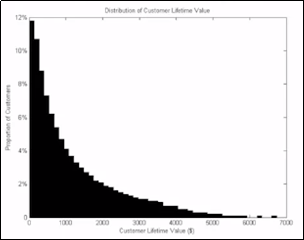 The middle plot that has an r value of 0.9, very high correlation there, very tight cluster, looks like pretty much a straight line.
When we have a lower correlation coefficient, the 0.4 on the right, or the negative 0.7, we see there's more dispersion there. But there still is a linear relationship.

Correlation can, however, be misleading.
1. This is due to outliers.
If we try to draw a best fitting line for the scatter plot below, we will be shown that there is a strong linear relationship here. But actually, it is because of that one single outlier that we will get that result. If we were to discard that and just look at that mass of points, we would not get nearly as strong a linear relationship.