There are three concepts that are critical to performing a valid cluster analysis:
1. Data should be in the correct form by taking into consideration what each variable represents.Two most common data types:
Datasets may contain variables with values that are on very different scales. Thus, before performing clustering, the data needs to be normalized, or also called standardized.
Normalization takes care of differences in scale by transforming each original value to its standard value. The operation consists of subtracting the mean and dividing by the standard deviation.

Why should we normalize our data?
Normalized values enable an easier interpretation of cluster analysis results.
​​2. A proper metric should be established to be able to measure the distance between every pair of observations.
​The Euclidean distance is the most commonly used measure of the similarity between two observations. This measure is the equivalent of the straight-line distance between two objects in a two-dimensional space.
Continuing the previous example, we compute the distances from each pair of persons in the dataset by using the normalized age and income values. 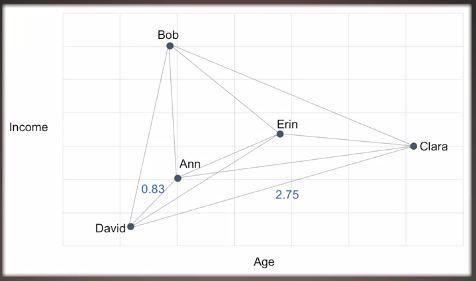 5 Ward's method
​Sum of squares criterion. The sum of squares refers to the squared distance from each observation to the centroid of the cluster to which it is assigned.