For most goods, consumers are willing to purchase more units at a lower price than at a higher price. The inverse relationship between price and the quantity consumers will buy is so widely observed that it is called the law of demand. The law of demand is the rule that people will buy more at lower prices than at higher prices if all other factors are constant. This idea of the law of demand seems to be a pretty logical and accurate description of the behaviour we would all expect to observe and for now, this will suffice.The law of demand states that consumers are willing and able to purchase more
units of a good or service at lower prices than at higher prices, other things being equal. Have you ever thought about why the law of demand is true for nearly all goods and services? Two influences, known as the income effect and the substitution effect, are particularly important in explaining the negative slope of demand functions. The income effect is the influence of a change in a product’s price on real income, or purchasing power. If the price of something that we buy goes down, our income will go farther and we can purchase more goods and services (including the goods for which price has fallen) with a given level of money income. The substitution effect is the influence of a reduction in a product’s price on quantity demanded such that consumers are likely to substitute that good for others that have thus become relatively more expensive.The concept of demand is often depicted in a graphic model as a demand curve. A demand curve is a graphic illustration of the relationship between price and the quantity purchased at each price. When plotting a graph for demand, the price is measured along the vertical axis and the quantities that would be purchased at various prices are measured along the horizontal axis. The demand curve shows the
relationship between the own price of a good and the quantity demanded of it. Any
change in own price causes a movement along the curve as shown in Figure . In
this case, a rise in price from P1 to P2 results in a fall in quantity demanded from Q1to Q2 i.e. a move from B* to A* in the figure. 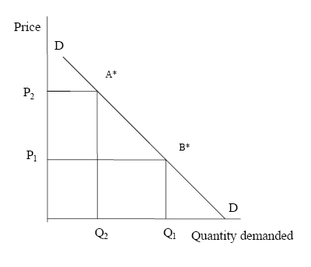 The same information can also be given in a table or demand schedule, such as Table , or by an equation for the demand function such as the following:
P = 100 – 0.25Q where P is price and Q is quantity. The advantage of the equation is that it is compact to work with, and modern managers in both the private and public sector rely on such functions (which are estimated by using regression analysis, explainedin unit 6) with increasing frequency.

THE MARKET DEMAND CURVE
The market demand curve is the total of the quantities demanded by all individual consumers in an economy (or market area) at each price. Economic theory supports the proposition that individual consumers will purchase more of a good at lower prices than at higher prices. If this is true of individual consumers, then it is also true of all consumers combined. This relationship is demonstrated by the example in Figure, which shows two individual demand curves and the marketdemand that is estimated by adding the two curves together.

The market demand curve shows that the quantity purchased goes up from 12 to 22 as the price falls from Rs. 6.00 to Rs. 2.00. This is called a change in quantity demanded. As the price falls, a greater quantity is demanded. As the price goes up, a smaller quantity is demanded. A change in quantity demanded is caused by a change in the price of the product for any given demand curve. This is true of individual consumers’ demand as well as for the market demand. But what determines how much will be bought at each price? Why are more televisions bought now than ten years ago, despite higher prices? Why are more paperback books bought today than in previous years, even though the price has gone up? Questions such as these are answered by looking at the determinants of demand.
THE DETERMINANTS OF DEMAND
Many forces influence our decisions regarding the bundle of goods and services we choose to purchase. It is important for managers to understand these forces as fully as possible in order to make and implement decisions that enhance their firms’ long-term health. It is probably impossible to know about all such forces, let alone be able to identify and measure them sufficiently to incorporate them into a manager’s decision framework. However, a small subset of these forces is particularly important and nearly universally applicable. As stated above, the overall level of demand is determined by consumers’ incomes, their attitudes or feelings about products, the prices of related goods, their expectations, and by the number of consumers in the market. These are often referred to as the determinants of demand. Determinants of demand are the factors that determine how much will be purchased at each price. As these determinants change over time, the overall level of demand may change. More or less of a product may be purchased at any
price because of changes in these factors. Such changes are shown by a shift of the entire demand curve. If the demand curve shifts to the right, we say that there has been an increase in demand. This is shown as a move from the original demand D1D1 to the higher demand D2D2 in Figure. The original demand curve can be thought of as being the market demand curve for soft drinks. At a price of Rs. 15.00, given the initial level ofdemand, consumers would purchase 6,000 soft drinks. If demand increases to the 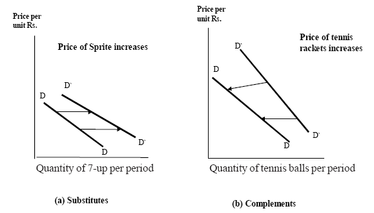 What effect would you expect of an increase in the price of movie tickets to have on the demand for home VCDs and tapes? These are substitute goods. That is, we assume that people view movie tickets and rented tapes in much the same manner; some people would be willing to be entertained with either medium depending upon the price of the two mediums, the convenience of obtaining each, and so on. If the price of movie tickets goes up, we would expect the demand for videodisks and tapes to rise as well. Why? If the price of movie tickets rises, fewer people attend theatre movies (according to the law of demand). But these same individuals still have a desire for entertainment and they view rented tapes in much the same way as theatre movies. Some of them will now substitute rented tapes for the movies they would have attended in theatres, and this is seen as an increase in the quantity demanded of rented tapes. In general, if we have two products, C and D, which are substitutes, we can expect that a rise in the price of C (or D) will cause the demand for D (or C) to go up. Economists and other business analysts are, therefore, concerned with all other prices that may affect the products they are analyzing. The prices of both complementary and substitute products can be expected to influence demand. Later in this block, we will see how a measure called the cross-price elasticity of demand can be helpful in determining whether two goods are complements, substitutes or neither.OTHER DETERMINANTS OF DEMAND
It would be a monumental task to identify everything that might have someinfluence on the demand for any product. So far, the four most important influenceshave been identified: a product’s price, income, tastes and preferences, and theprice of complementary or substitute products. A number of others were identifiedin section 4.2, which also affect demand. By now you will be able to establish thedirection of the effect i.e. whether it will increase or decrease demand. Forexample, population growth obviously causes the potential demand for nearly allproducts to rise. In many cases, economists involved in analyzing the demand forparticular products look at individual components of the population as determinantsof demand. The changing age distribution, for example, may have differentialeffects on different markets. The growing proportion of people over 65 in thepopulation has important ramifications for demand for such things such as healthcareproducts. Changes in other demographic characteristics and in thegeographical distribution of the population may also be important. You may think ofa variety of other effects on consumer demand as well.