One of the most important decisions made by managers is setting the price of the firm’s product. If the price set is too high, the firm will be unable to compete with other suppliers in the market. On the other hand, if the price is too low, the firm may not be able to earn a normal rate of profit. Pricing is thus a crucial decision area, which needs much of managerial attention. In this unit we will examine the factors that govern this key decision area. Traditional economic theory explains this in term of demand and supply functions.According to traditional analysis, firms aim towards maximisation of profits. The interplay of demand and supply in the market determines the price, which is often referred to as equilibrium price.
There are, however, many other factors that influence the pricing decision of a firm. These are – the number of firms in the industry, the nature of product, and the possibility of new firms entering the market and so on. In this unit you will understand more about some of the crucial factors that operate in the market place. In the process, you should gain valuable insights into the operations of firms under differentmarket structures, which are more typical of the existing real world situations.
CLASSIFICATION OF MARKET STRUCTURES 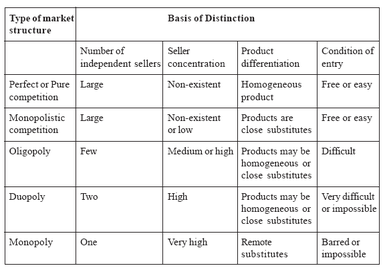 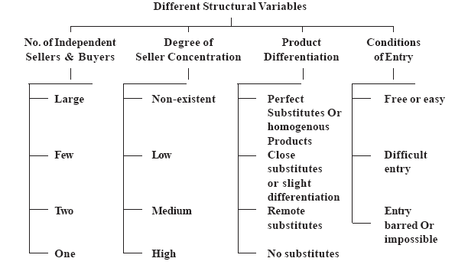 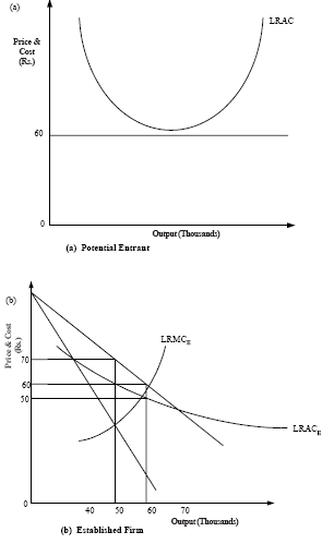 Setting the right price for its product is crucial for any firm in the market. This is because the price is such a parameter that it exerts a direct influence on the demand for and supply of the product and thereby on its sales and profit – the important yardsticks for the success or failure of the firm. If the price is set too 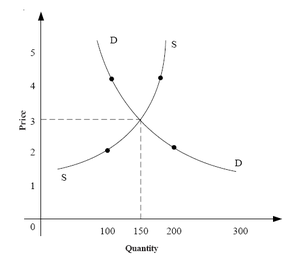 high, the seller may not find enough customers to buy his/her product. On the other hand, if the price is set too low, the seller may not be able to recover his/her costs. Further, demand and supply conditions vary over time and the managers must therefore review and reformulate their pricing decisions from time to time.It is clear that the price of a product is determined by the demand for and supply of that product. Table illustrates the demand and supply schedules of a good. 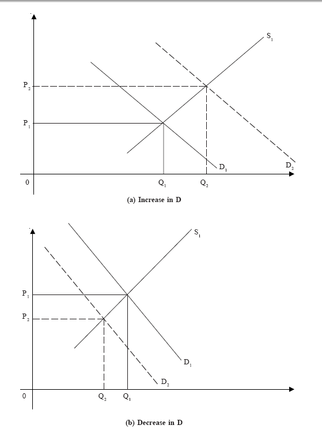 Let us assume that in the above example the market price, P = 3 and no other price prevails in the market (Figure). Because if P = 5, supply exceeds demand and the producers may not be able to find enough customers for their product. This would result into competition among the producers forcing them to bring down the price to 3. On the other hand, if P = 1, the demand exceeds supply which would give rise to competition among the buyers of the product, pushing the price up to 3. Therefore, at P = 3, demand equals supply, which is called equilibrium price. The equilibrium price is thus determined by the interaction of demand and supply.We have seen in Block 2 that the demand for a good depends on a number of factors as does supply of a good. Therefore, the factors which affect either demand or supply are also determinants of price. A change in demand and/or supply would bring in a change in price. For instance, if the supply of a good is fixed, as shown in figure, the level of demand appears to determine the equilibrium price. In this case, the price is determined by the ‘other factors’ influencing the level of demand curve. An increase in demand from D1 to D2, leads to an increase in equilibrium price from P1 to P2 and an increase in quantity from Q1 to Q2 (see figure). Quite the opposite holds true in the event of a decrease in demand which is shown in figure.If the demand for a commodity is fixed, as shown in figure the level of the supply curve determines the equilibrium price of the commodity. The equilibrium price would, therefore depend on the ‘other factors’ underlying the supply curve of the commodity. Figure shows that an increase in supply from S1 to S2 causes price to fall from P1 to P2 and the quantity to increase from Q1 to Q2. Figure shows exactly the reverse case.
So far we have discussed the general equilibrium price which is determined by the interaction of demand and supply. However, the actual shapes of the demand and supply schedules depend on the structure of the product, market and the objectives of the firm. Thus market structure and firms’ objectives also have a bearing on 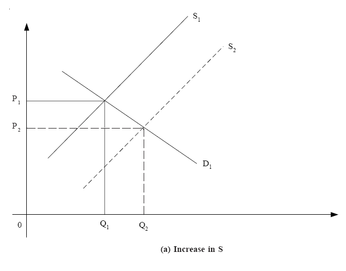 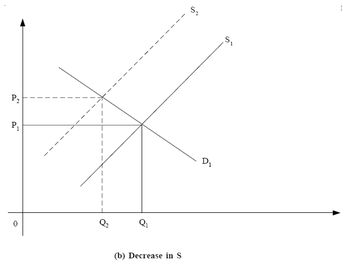 price. Since market structure influences price and different product groups fall under different market structures, pricing decisions depend upon market structure. For instance, automobile prices are set quite differently from prices of soap because the two products are produced by firms in different market structures. Accordingly, in the subsequent units we shall discuss price determination under pure competition and pure monopoly, and monopolistic competition and oligopoly. A large firm may produce a number of products, which are sold in variety of markets catering to the needs of different sections of the society. Let us take the example of HLL, which produces products ranging from cosmetics to food products. Here comes the real task to be performed. At times it happens that price set for one of such products may affect the demand for the other product sold by the same firm. For example, the introduction of Alto from MUL had an effect on the price of Zens sold in the market. Pricing of multiple products/a number of products produced by the same firm It is difficult to set a price of multiple products but once it is set, the products make their own place in the market. Take the example of Hindustan Lever Limited (HLL) referred to earlier. Lever Brothers Limited was started in the summer of 1888, as a branded marketing and packaged mass consumption goods (PMCG) company and Sunlight was the most popular brand from England. In 1933, Lever Brothers India Limited was formed which was finally named HLL in 1956. This is India’s largest PMCG. The vision of the company is to meet the everyday needs of the people everywhere. Over the past seventy years HLL has introduced somewhere around 110 brands, most of which have become household names in the country. The products vary from personal care products to beverages. A list of such products of HLL is provided in Table. This example also gives an idea of
product differentiation. In this case the price of each product is different because it caters to different segments of the market. 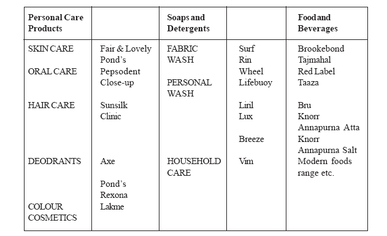