Everything you wanted to know about social media and web 2.0

Is it social networking?

Is it social bookmarking?

In Web 2.0 terms, this would be a website that doesn't just give you information, but interacts with you while giving you that information. This interaction can be as simple as asking for your comments or letting you vote on an article, or it can be as complex as Flixster recommending movies to you based on the ratings of other people with similar interests.

Think of regular media as a one-way street where you can read a newspaper or listen to a report on television, but you have very limited ability to give your thoughts on the matter.

Social media, on the other hand, is a two-way street that gives you the ability to communicate too.

A Guide to the Social Web

Is Social Media and Social News The Same Thing? It is easy to confuse social media with social news because we often refer to members of the news as "the media." Adding to the confusion is the fact that a social news site is also a social media site because it falls into that broader category.

What Are Some Social Media Websites? Now that we have answered the question of what is social media, we can move on to social media websites. Because social media is such a broad term, it covers a large range of websites. But the one common link between these websites is that you are able to interact with the website and interact with other visitors.

Here are some examples of social media websites:

And these websites are not the only social media websites. Any website that invites you to interact with the site and with other visitors falls into the definition of social media.

This video “Web 2.0″ was developed using the Web 2.0 write up in Wikipedia this video is to help teach educators about Web 2.0 tools:

This video “The Machine is Us/ing Us” is described as Web 2.0 in just under five minutes and was created by Dr. Michael Wesch, an Assistant Professor of Cultural Anthropology and Digital Ethnography at Kansas State University. It is really worth watching. 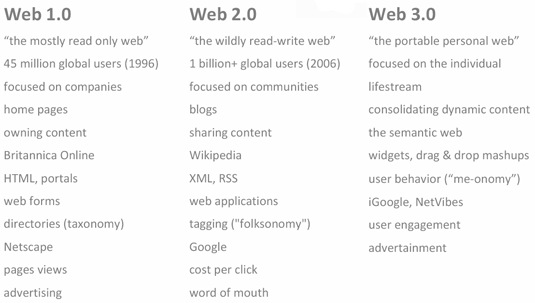